Flossing and brushing get the spotlight when it comes to oral care, but there’s another step that deserves the same buzz: mouthwash! Gargling it can leave you with delightfully fresh breath, but that’s not the only benefit that you’ll reap from using mouthwash — it'll also help remove impurities and reduce buildup among many other perks. That’s why we’ve gathered a list of the most frequently asked questions about mouthwash and reveal all the secrets to effectively using it. If you’ve always wondered why you should use mouthwash and how to use it, we’ve got the answers below to help you achieve a beautiful smile!

What Are You Supposed to Use Mouthwash for Anyway?

Mouthwash is a great way to supplement your oral care routine to help not only freshen your breath but also fight bacteria and help reduce buildup for healthy teeth and gums. While you should always floss and brush, mouthwashes can be a supplementary tool to defend your mouth against plaque, bacteria and cavity-forming sugar acids. Some Desert Essence mouthwashes also feature ingredients such as neem, which neutralizes bacteria, and aloe, which soothes the mouth. 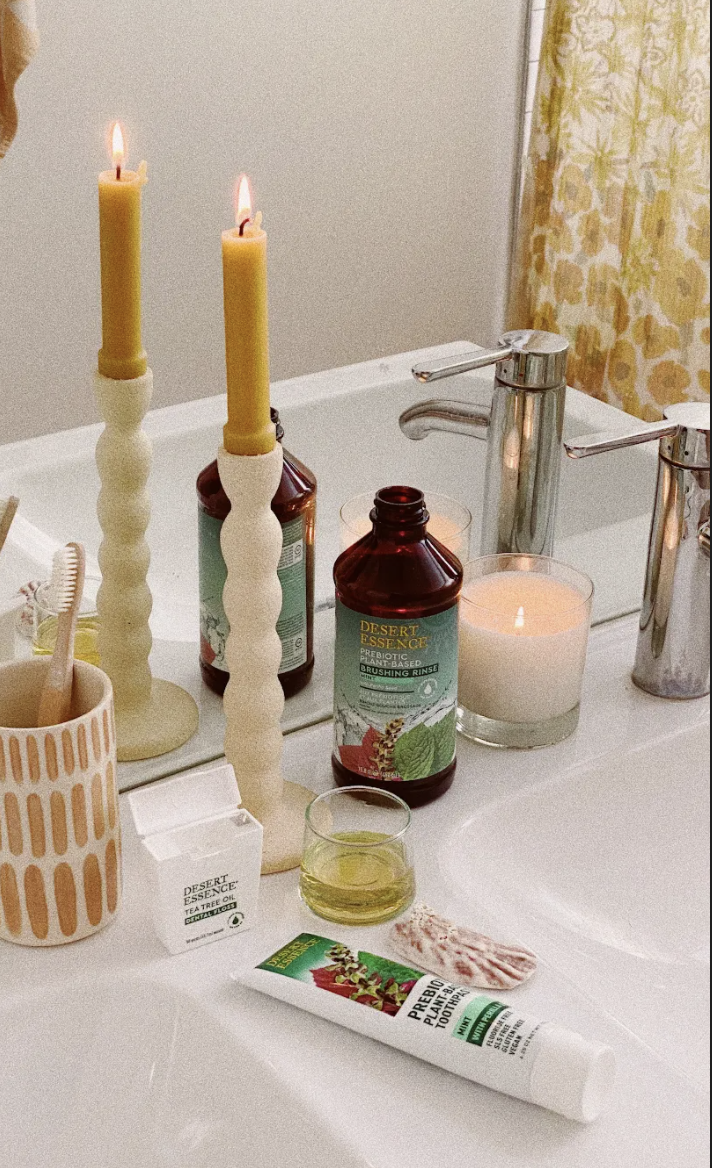 Can You Use Mouthwash in the Middle of the Day?

Mouthwash is typically used right before you head to bed. It’ll help your mouth fight bacteria before you go to sleep and can supplement flossing and brushing in any good oral care routine. For a midday refresher, what you can use is a mouth spray that increases moisture in your mouth and freshens your breath. Desert Essence’s Moisturizing Mouth Spray, for example, contains 20% Xylitol and Glycerin to increase saliva and lock in moisture. In this formula, plant-based oils also help neutralize odor-causing bacteria, which makes it perfect for a quick refresh. All you have to do is spritz it in your mouth three to five times whenever you pick it up throughout the day.

When Should You Use Mouthwash?

You might be wondering, do you use mouthwash before or after brushing, and how often should you use mouthwash anyway? Typically, you gargle mouthwash as the last step in your dental care routine after brushing. Some people will also use it in the morning after brushing their teeth. Mouthwash can make for an effective supplement in your brushing routine, but it shouldn’t be a replacement for brushing your teeth. In addition to mouthwash, you can use a brushing rinse before you brush your teeth — this helps neutralize odor-causing bacteria and fosters a healthy mouth biome. If you oil pull, that also goes before brushing, and it’ll help with cutting down bacteria and buildup in the mouth.

How Do You Use Mouthwash?

If you're wondering how to use mouthwash, we've got you covered. After brushing your teeth, take out about half an ounce of mouthwash into your bottle cap, then pour it into your mouth — don’t dilute it with water or swallow it. Swish the liquid in your mouth for at least 30 seconds, then spit it out.

Which Is the Best Mouthwash for Me?

Level up your dental care routine with alcohol- and sugar-free mouthwash from Desert Essence. Our formulas harness the power of plants to help keep your mouth clean and fresh. With tea tree oil, our mouthwashes fight the buildup of cavity-forming sugar acids. Ingredients such as spearmint, mint and ginger help freshen up the breath. In addition to traditional mouthwashes, Desert Essence also carries brushing rinses, oil-pulling rinses and mouth sprays to supplement your oral care routine for a beautiful smile. From Tea Tree Oil Whitening Plus Mouthwash to Arctic Berry Moisturizing Mouth Rinse, you’ll have many options for your specific needs.